I’ve always had a romantic viewpoint of humanitarian workers who voluntarily offer their help in war-torn countries. Black and white scenes of them kneeling down to a child offering food or medicine almost always come to my mind and I used to think” “Yes, that’s what I want to be when I grow up!”

Of course, I never came to be that – not yet, at least. The closest I have ever been involved in humanitarian voluntary work was when I was the press officer for the Malaysian Medical Relief Society. (The first humanitarian organisation to provide a platform for Malaysians to take a role in the international humanitarian arena. It was founded by a lady named Dr. Jemilah Mahmood in 1999.)

Almost 10 years ago the mention of humanitarian or volunteer work was foreign to anyone in Malaysia, but thanks to Dr. Jemilah, it is now considered a ‘trendy job’. I would like to believe that I’m not the only one with a skewed romantic view for this kind of work.

After a year of working with her and listening to her countless stories, my original view of the work was far from the reality. In one of her stories, she spoke about her shocking and painful experience while serving in Baghdad in 2003. After offering medical relief and supplies to a hospital, her van was attacked by Iraqis. Dr. Jemilah and her team were mistaken to be Syrians who the Iraqis thought had bombed their village. She was shot at the hip. Luckily, she survived, but the driver and an Iraqi hospital assistant died. She always reminds me that “humanitarian work is not easy especially when you do it voluntarily. The only way to go with it is to have an all-or-nothing stance”.

She once said that her family and her own career (as a practicing obstetrician and gynaecologist) are her biggest sacrifices.

“As a full-time volunteer, this takes away a lot of time from my husband and two sons. But I know I have full support from them,” she says oftentimes referring to her husband as her cheerleader.

Growing up in a family made up of a mix of nationalities, race and religion, she often equates her family to a mini United Nations.

Her father is Malay and her mother is Chinese and she has a half-sister who is British. When she was growing up, her father used to take in visitors who wanted a place to stay and eat so her house turned out to be a one-stop place filled with people from all walks of life.

I suppose this made it easy for her to adapt to her surroundings when she took up the offer to be the Chief of Humanitarian Response Branch in the United Nations Population Fund in 2009. Basically, she is in charge of sexual reproductive health and population issues for the United Nations.

Although humanitarian voluntary work is far from the romantic view I initially had, Dr Jemilah’s all-or-nothing attitude still keeps me driving to do the things that I am passionate about in life – writing and doing voluntary work. 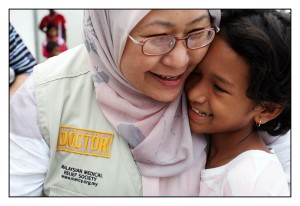